Outcome: In the course of discovery it was learned that The Mindbenders was produced by a group of men who had turned away from mainstream evangelicalism and had devised their own brand of Eastern Orthodoxy, including burning incense, using icons, and venerating Mary, blended with the more authoritarian aspects of the Shepherding movement. These men saw themselves as being at war with the local churches. One of them had used his position as the newly hired new books editor for Thomas Nelson Publishers to push through publication of The Mindbenders over the objections of other Nelson staff members. After these facts were brought out, the publisher and the author and his associates signed a settlement agreement, which involved withdrawing the book from publication and a public statement of retraction and apology from the publisher to Witness Lee and the local churches to be printed in major newspapers around the country beginning on April 10, 1983.

Note: Click on the preview page to view the entire documents. 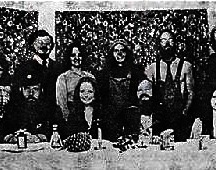 Both The Mindbenders and The God-Men share a common source in the animus sown into members of the Christian World Liberation Front (CWLF) at UC Berkeley by Jack Sparks and his associate, Jon Braun. Sparks eventually left CWLF and with Braun and others formed the New Covenant Apostolic Order (NCAO) with the express intent of bringing evangelicals into Eastern Orthodoxy. Before he left, Sparks commissioned a young loyalist, Alan Wallerstedt, to write a monograph attacking the ministry of Witness Lee and the local churches. This monograph became source materials for both The Mindbenders and The God-Men (for more details).

In 1975 Jon Braun, Jack Sparks, and others formed the New Covenant Apostolic Order (NCAO), which promoted an odd blend of evangelicalism and Eastern Orthodoxy with an authoritarian bent. The order declared “war” on Witness Lee and the local churches. Peter Gillquist, the order’s putative leader, became new books editor of Thomas Nelson Publishing. The first book he commissioned was The Mindbenders, which the NCAO leaders produced and Gillquist pushed through opposition at Nelson to publish. Subsequently, the NCAO leaders formed the Evangelical Orthodox Church (EOC) and appointed themselves as its bishops (for more details). 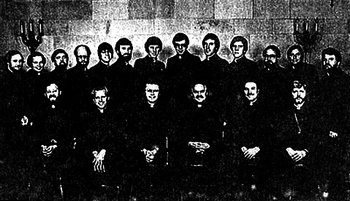 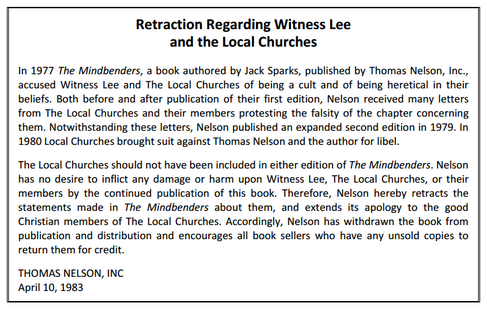 After suffering significant damages from The Mindbenders, including kidnappings and assaults, groups of local churches in various parts of the country filed four separate actions against The Mindbenders. The full scope of the NCAO leaders’ conspiracy became evident in the course of discovery in the case. In 1983, the defendants, including Jack Sparks and his associates, as well as Thomas Nelson, signed an agreement to withdraw the book and to pay an amount for damages. Beginning on April 10, 1983, Nelson ran an advertisement with a retraction and an apology in major newspapers and Christian periodicals across the United States.

For a complete timeline of all the events that occurred during the litigation against the The Mindbenders, click here.