Outcome: The Statement of Decision documented the defendants’ reckless disregard for and intentional, knowing distortion of the truth regarding the local churches. Judge Leon Seyranian ruled that The God-Men was “in all major respects false, defamatory and unprivileged, and, therefore, libelous” and awarded $11,900,000 in damages to the plaintiffs. It was at the time the largest award ever in a libel action, but the plaintiffs only received less that 0.3% of the award because SCP had declared bankruptcy to avoid involvement in the trial. The testimony of six highly qualified experts was subsequently published in The Experts Speak, and one of the experts, Dr. J. Gordon Melton, wrote and published An Open Letter Concerning the Local Church, Witness Lee, and The God-Men Controversy.

Note: Click on the preview page to view the entire documents. 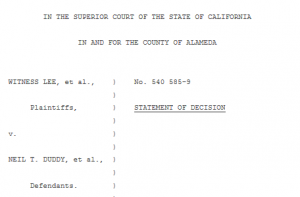 Judge Leon Seyranian’s Statement of Decision documented his findings of falsity and malice in The God-Men and its German translation, Die Sonderlehre. His decision referenced the deposition testimony of SCP and their associates, the exhibits produced before the court, and the testimony of expert witnesses. This online version contains links to the electronic images of the deposition pages and exhibits referenced in Judge Seyranian’s ruling. 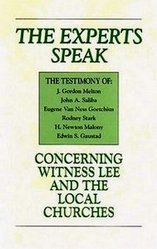 The Experts Speak contains transcripts of the testimony of five highly qualified expert witnesses who testified before the court in The God-Men case, plus a written statement submitted by a sixth expert. The fields represented by these experts include contemporary religious movements, the history of religion in America, psychology, and sociology. These experts presented convincing testimony that Neil Duddy and the Spiritual Counterfeits had intentionally misrepresented the local churches and the teaching of Witness Lee. 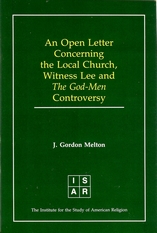 After the conclusion of the case, one of the expert witnesses, Dr. J. Gordon Melton, Director of the Institute for the Study of American Religions and author of the Encyclopedia of American Religions, wrote and published An Open Letter Concerning the Local Church, Witness Lee and The God-Men Controversy. In his letter Dr. Melton demonstrated how The God-Men had completely misrepresented Witness Lee’s teaching by divorcing his words from their original context. Dr. Melton called on Christians to discard The God-Men and all writings based on it.

For a complete timeline of all the events that occurred during the litigation against the The God-Men, click here.